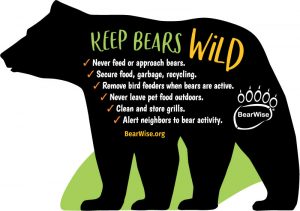 BearWise® was developed by state agency bear biologists who wanted to make sure that no matter where people lived, played or traveled, they got the same consistent message about coexisting with bears. Today the BearWise program is managed by a team of North American bear biologists and communications professionals and supported by the Association of Fish and Wildlife Agencies and the BearWise member states.

The BearWise Website Is Easy to Find and Easy to Use
Bearwise.org offers a wealth of information on black bear biology and behavior as well as sections on preventing human-bear conflicts at home and outdoors, important bear safety information, helpful FAQs and tips on how neighborhoods, communities and businesses can put BearWise to work. 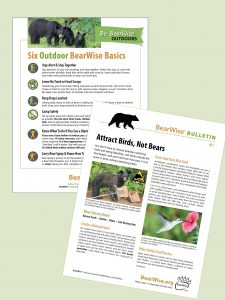 Our BearWise Store Is Filled with Resources
You’ll discover many free print-ready handouts and activity sheets in our online BearWise store plus items like magnets, door hangers, stickers and signage that can be ordered individually or in bulk. Check out the State Stuff category for BearWise materials for your state.

BearWise Keeps You Informed
In the BearWise article bank, you’ll find timely articles on what bears are up to and what people can do to prevent conflicts with bears. Articles may be reprinted in newsletters or community newspapers and shared on social media. Anyone interested in receiving timely information about living with bears can subscribe to BearWise emails.

Discover why today people all over North America rely on BearWise for information they can trust and resources they can use.

The BearWise® name and logos are registered trademarks of AWARE, America’s Wildlife Association for Resource Education

BearWise® has a prominent role at 6th International Human-Bear Conflicts Workshop in Lake Tahoe, Nevada in October 2022. A five-member BearWise panel will discuss how BearWise builds bridges, promotes partnerships and works to bring people together at the national, state, community and neighborhood levels.

The Human-Bear Conflicts Workshop is a unique gathering that occurs every three or four years and brings together wildlife managers, social scientists, educators, researchers, groups and organizations and people from all over the world and all walks of life who are involved in better understanding, resolving and preventing human-caused conflicts with bears. Submissions are reviewed and voted in by a large panel of independent judges, so it is an honor to be chosen to share the BearWise story with this international audience. 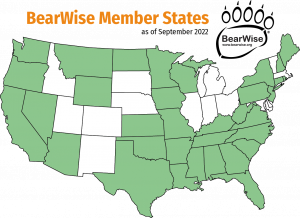 The work to create a vehicle that would give state wildlife agencies a way to deliver standardized messaging on living responsibly with black bears began back in 2012 in the Southeast backed by the Southeast Association of Fish and Wildlife Agencies. When the website for the BearWise® Program debuted in mid-2018 it quickly became one of the most widely used sources for science-based information and useful resources for living more responsibly with black bears.

Like bears, the internet doesn’t recognize state boundaries, and soon people from all over North America were visiting the website and downloading materials. States outside the Southeast wanted to know how they could join BearWise. In 2022 BearWise became a non-profit, North American program under the Association of Fish and Wildlife Agencies (AFWA). By mid-year 32 states had joined BearWise.

The BearWise store offers free bulletins and fact sheets, useful tools like books, banners, doorhangers, stickers and signage, and fun promotional items for kids and adults. The Website provides in-depth information and a library of timely articles that are fun to read and filled with useful information and practical tips. 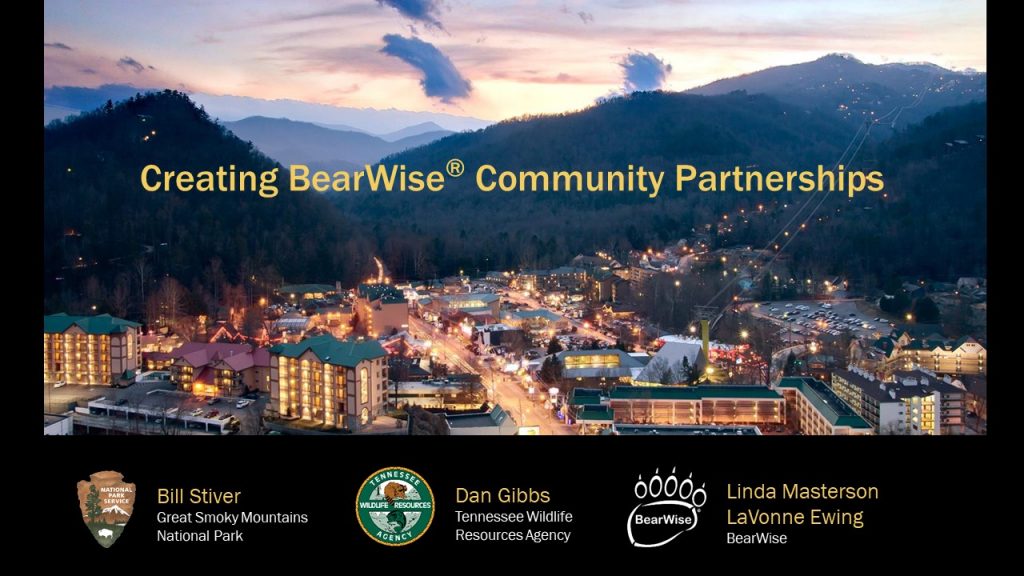 The BearWise® program was pioneered by bear biologists from SEAFWA’s 15 member states, where about 70,000 black bears are trying to share space with more than 124 million people. Growing populations of both bears and humans are leading to a rising number of human-bear encounters and conflicts.

“Bears have no idea when they cross from public to private lands or from one state to another; that’s why a regional effort to reach out to people who live, work and recreate where bears live too makes so much sense,” explained Gibbs.

The BearWise store offers a range of educational materials, including free print-ready handouts. Anyone interested in receiving timely information about living with bears can subscribe to BearWise emails. As the BearWise program continues to grow and develop, additional resources will be added to the website for bear managers and professionals as well as members of the public, including homeowner associations and municipalities.

The BearWise® name and logos are registered trademarks and may not be used on educational, promotional or commercial materials or products without prior written approval from BearWise. Request our Name & Logo Usage Guidelines

About BearWise
Need Help with Bears in Your State?