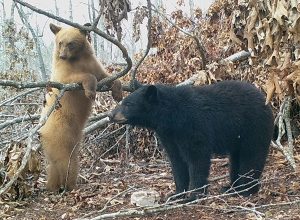 Photo by Missouri Department of Conservation

A. Black
B. Brown
C. Cinnamon
D. Blonde
E. Blue-Grey
F. White
G. All of the above

If you picked G, congratulations, you’re pretty smart. Black bear is a species, Ursus americanus, not a color. Black bears come in more colors than any other North American mammal.

In the eastern third of North America, the majority of black bears are a deep black color, and about a quarter of them sport a white chest blaze. The further west you go, the more likely it is you could see brown, cinnamon, tan or blonde black bears. And in British Columbia you might be lucky enough to get a glimpse of the rare Kermode bear, a subspecies of black bear with all-white fur. Researchers tracking black bears have even documented cases of bears changing colors during the year. And it’s not uncommon for a mother bear to give birth to cubs of several different colors.

No one knows for sure why black bears come in so many different colors, but scientists suggest that the colors allow bears to adapt to their habitat; bears in densely wooded areas that are dark and shady are often darker colored than bears in open, sun-drenched landscapes where lighter-colored fur helps them blend in better.